I was a world-class babysitter. I was booked weeks in advance, months ahead for big 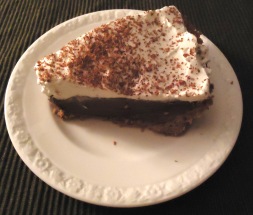 occasions. There were bidding wars for New Year’s Eve. I kept a spreadsheet of clients with detailed notes. I was a pro and suspect this fact will figure largely in any Barbara Corcoran-style profile of me.

My clients wooed me, leaving various treats “to help pass the time.” One of my favorite clients wooed and won – for life. One babysitting eve, I casually reviewed their fridge and noticed little footed cups of chocolate pudding. I figured they wouldn’t mind my trying one. It was chocolate pudding with crushed graham crackers sprinkled on the bottom and top. This combo was a revelation to me. (Chocolate pie in my house was rare and was the black bottom variety made with a traditional pie crust.) I succumbed like Alfred Molina in Chocolat, awaking from my chocolate stupor to find I’d eaten all but one of the puddings. I carefully washed the cups (and my face) and didn’t look my employer in the eye when it was time to drive me home. My fourteen-year-old self expected I’d lost a client.

A couple of weeks later, they booked me again. After I’d put the kids to bed, I checked the fridge (cautiously this time). They’d left eight cups of pudding treats on a shelf with a note “For Caroline.” My allegiance to them – and to chocolate pudding and graham crackers – was sealed.

When it comes to chocolate pie, in my book, if it ain’t got a graham cracker crust, it ain’t really chocolate pie. Similarly, if the pudding wasn’t made on the stove from scratch…it ain’t the real deal. (Although in college we did enjoy the big cheat: Store-bought crust, Jell-O instant pudding and Cool-Whip. Toothy enough for a 20 year old and easily made in a dorm room.) I still use store- 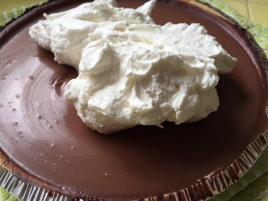 bought crust (Keebler is the best, imo) and though I’ve mucked around with the basic recipe (adding liqueurs, adjusting sugar, trying various percentages of cacao, etc.), over time I’ve decided that simpler really is better. (Although Kahlua can be a nice addition.)

Full disclosure – I make my pudding the way my grandmother showed me, not from a written recipe. So to ensure total foolproof ease here, the recipe below is adapted from Epicurious (Gourmet, 2004). The pudding always thickens, the pie always sets. And it tastes just as good as Grandma’s.

And so, I give you, Purloined Pudding Chocolate Pie, so named for those I stole and for the fact that this will disappear before your eyes.

Note: You must plan ahead. This pie takes several hours of cooling and setting time. For same day serving, start early in the morning.

In a heavy 3-quart saucepan, whisk together sugar, cornstarch, salt, and yolks until well combined (the mixture will quickly become like paste, keep going until you’ve incorporated all the cornstarch). 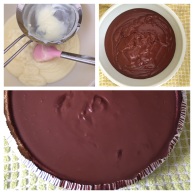 Add the milk in a steady stream, whisking constantly until mixture is smooth.
Bring to a boil over moderate heat, stirring constantly, then reduce heat and simmer, stirring, about one minute. The filling will be beautifully thickened.

Force filling through a fine-mesh sieve into a bowl, then whisk in melted chocolates, butter, vanilla, and Kahlua if using.

Let cool for about 15 minutes, then cover surface with buttered wax paper and cool completely, then refrigerate for about 2 hours.

Spoon filling into crust and chill pie, loosely covered, at least 6 hours. At this point the pie can be stored, covered loosely with plastic wrap, overnight.

When ready to serve, top pie with sweetened whipped cream and sprinkle with cocoa. Serve immediately. 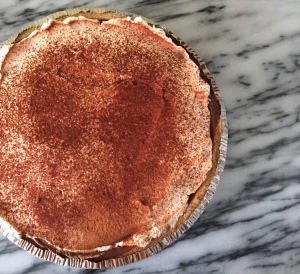 Assembled pie will last, loosely covered with plastic wrap, two days in fridge. (JK, it will be eaten long before two days pass.)

I come from ice cream people. In our house, ice cream was pretty much another course, 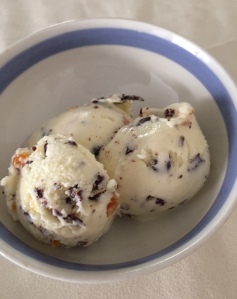 not even dessert. Our palate was determined by my dad whose taste veered toward fruit, peach especially, or strawberry. It was a great day when we had “Van-Choc-Straw” so I could carefully carve out the Choc with none of the dread strawberry on it. Vanilla was a good second – we always had plenty of Bosco syrup on hand to doctor it up and create ice cream soup.

Outside, we had Carvel or Friendly’s. Friendly’s was the bomb. Their mint chocolate chip (bright green and creamy) is still my desert island flavor. Weaned on the green, it took me a long time to cozy up to white versions, especially since my first exposure to non-green mint chip was a commercial brand whose texture was a bit grainy. When I went to college in Boston, I was introduced to Steve’s and the concept of the “mix-in.” Once I had Heath Bar in ice cream I was gone all over again. Then that magical day when Ben & Jerry’s appeared in supermarkets. Coffee Heath Bar Crunch – sublimity in every way. (Sadly now, it’s not the same. Fair Trade practices, which I totally support btw, caused B&J to switch from Heath Bar to some other toffee. I get it, I do. It just means that I also no longer get Coffee Toffee Crunch. Sigh.)

Over the years I’ve had different ice creams in different places: Berthillon in Paris, gelatos in Italy and Spain, small batch creameries here and there. It’s all good, it’s ice cream! While certainly not jaded, I did believe my ice cream “ah HA’s” were finished. 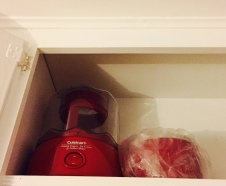 Until that Williams-Sonoma Holiday catalog arrived a few years ago. Featuring a bright red Cuisinart ice cream maker at a reasonable price point. (“Homemade” ice cream had meant heavy equipment, rock salt, and my Uncle Bob bribing us kids with quarters to turn the crank so that, in the end, we could “enjoy” mushy vanilla cones.) I read about this machine – no crank, no salt, no effort, I’m in! And I bought myself one.

And then I made mint chocolate chip ice cream. And then I, as they do say, died a little death. It. was. incredible. It put to shame EVERYTHING I’d had before and called “ice cream.” No point in trying to put into words that for which there are no words. The end.

I’ve made many a batch since then, but over time, SADNESS, I came to realize that dairy is not, actually, my friend. (Don’t speak.) So my cherry red ice cream machine sat unused for quite a while.

Until this past week when, doggone it, it was coming on August and I wanted some ice cream! Down came the machine, out came the dairy, in went the goodness, and…well, I think you can guess. (The little death.) Won’t you take this journey with me?

First stop, Marcella Hazan, The Essentials of Classic Italian Cooking. A Bible, order it now if you don’t have it. Super easy Egg Custard Gelato recipe. My only modification was to use Cointreau (and less of it) instead of Grand Marnier. 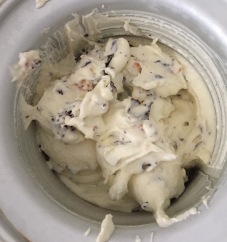 Stracciatella. If I’m ordering real gelato, this is my go-to flavor – sweet cream vanilla with shards of dark chocolate. Perfection. In Italy, I learned the key to stracciatella is to introduce the thinnest possible stream of chocolate into the churning gelato. The chocolate hardens instantly and cracks as the churn turns. (Note to self: Soap opera in food world, As The Churn Turns.)

And then – reader, steady yourself for this next part – inspiration. Trader Joe’s carries a product called Soft & Juicy Mandarins. Dried mandarin 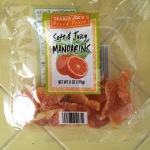 orange segments in sugar. For the record, I do NOT care for sugary dried fruit, but these were by the register and so… Oh my, these are DELICIOUS. I don’t know how, and possibly don’t want to know how (sulfur), they do it, but these are bursting with juicy orange flavor. And the sugar, while there and seemingly a lot, actually doesn’t do harm. Dried citrus is typically not to be desired, but these mandarins – delish.

So what if they were diced and say, tossed into some churning gelato? What would that be like? (It would be like heaven. The nuggets preserve all their juicy citrusy goodness through the freezing process and become chewier (not toothbreaking).)

Trust me, friends, this is a spectacular ice cream. It doesn’t need a cake or cookie to support it, no sauce or fruit embellishment. But if you should desire a little something on the side, I suggest a tiny, dark dark dark chocolate shortbread cookie. 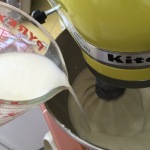 Beat egg yolks and sugar on medium speed until they are pale yellow and a soft ribbon drops from the beater when raised.

Heat the milk and orange zest in a saucepan over medium heat to a slow simmer. Do not boil. Strain milk through a fine mesh strainer into a spouted measuring cup. Wipe out sauce pan.

Pour the hot milk, in a thin stream, into the yolks, beating constantly. (Don’t be concerned 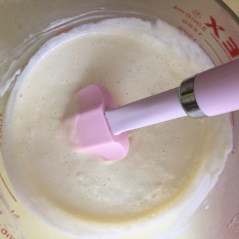 if this foams up a lot. Mine did, to my consternation, but the end result was perfect.)

Add the Cointreau and beat for a few seconds.

Transfer the mixture to the saucepan, turn heat to medium, and whisk constantly for two minutes. Do not boil.

Remove from heat and pour into large bowl. Let cool to room temperature, then cover tightly with plastic wrap and refrigerate overnight.

Once cold, freeze in your ice cream maker per the manufacturer’s instructions, about 20 minutes total time.

At the end of the churning time, sprinkle the diced mandarins over the churning gelato. Let them mix in well for a moment or two.

Then snip a tiny bit off the corner of the Ziploc and squeeze melted chocolate in a thin, steady stream over the churning gelato. Churn a moment or two to incorporate.

The gelato will now be super soft, so if that’s how you like it, dig in.

I prefer a firmer texture, so I transfer the gelato into a plastic container and let it sit in the freezer 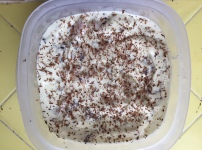 for a few hours. Then I shave some dark chocolate over the top to make it pretty.

Serve in small scoops. Enjoy (and don’t be afraid to show your delight)!