When I tell people about my mother, the word I most often use is “magic.” She proved it again and again during walks in our favorite nature sanctuary. We’d sit very still on rocks, 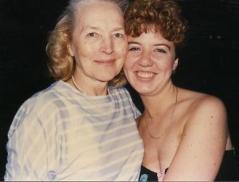 barely breathing, and suddenly, seemingly out of nowhere, deer appeared. It felt like Mom apparated them just for me. (Perhaps it was her Finnish heritage, but my mother made all of nature an enchanted forest.)

She revealed a most potent magic one afternoon when I was about three or four. I wanted cookies. “We can make them,” she said. Wha-a-t? What was this “making” of cookies? She parked me in a kitchen chair, pulled ingredients from shelves, and made a quick batch of drop sugar cookies. I was amazed. It was magic how an assortment of ingredients could come together and become something else, something delectable. That moment lit the spark for baking that still burns. I feel the same amazement today when a pile of stuff becomes a cake, or bread, or pie. 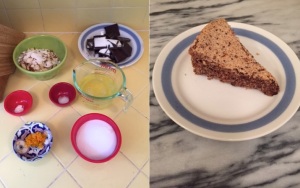 I’ll admit, though, that some transformations amaze me more than others. Few more so than egg whites beaten with sugar until stiff, additional elements folded in and baked until it becomes a CAKE. How is that possible?

A favorite version of this manifesting comes from another wonderful Alice Medrich* book, Sinfully Easy Delicious Desserts (Quicker Smarter Recipes by Alice Medrich). The recipe, Chocolate Walnut Tweed Torte, is simplicity defined but complexity experienced. (The fact that it’s gluten free is a happy bonus.) It’s dense, sort of chewy, chocolaty, but exceptionally light – exquisite. I’m not a walnut fan so I make it with almonds.

Put oven rack in the center. Preheat oven to 350.

It’s just terrific and comes together in about an hour. It doesn’t really need the whipped cream. The torte keeps covered for about two days, but I freeze remaining slices after serving. To me, it’s just as delicious ice cold, but frozen slices can sit at room temperature for about 20 minutes before serving.

My mom would love it.

*I first “met” Alice through her 1990 book, Cocolat (now out of print, but available through Amazon resellers), named for her chocolate truffle and baked goods empire. Cocolat is a beautiful book. The recipes are complex but extraordinary, and there are copious tips and notes throughout. I didn’t start small with this book. My first outing was a dessert called Pate Trompe: A deep, dense chocolate mousse chilled in a loaf pan containing about ¼-inch of coffee gelee. Plated, surrounded by mounds of diced gelee, the effect is of a traditional liver pate. It’s a show stopper. I have made many cakes from Cocolat in the ensuing years, but none as often as the Aztec Layer Cake, tantalizing layers of pecan meringue, chocolate genoise, and chocolate buttercream, scented with coffee and cinnamon. It’s divine. Alice is definitely a soul sister.